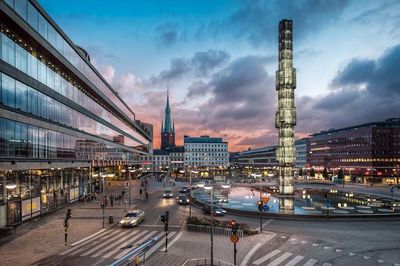 In Sweden, where equality is an essence of society, (maybe not a reality), the language has now been worked over to a chimeric language to be more inclusive and reflective of the diversity of the country. Lernia, a Swedish knowledge-based company, offering a wide variety of solutions for the workforce, as well as providing education for immigrants on the Swedish language, has created an experimental language to represent all the people living in different parts of the country. This “migrant inclusive accent” includes individuals with the most common accents spoken by the people of Sweden down to those who speak Swedish as a second language. Although the chimeric language is at an experimental level, it has already been adopted by the Boy and Girl Scouts automated telephone system and is being heard in the library announcements at the University of Stockholm.

The idea behind creating a new Standard Swedish ("rikssvenska"), originates from the notion that a person’s dialect or accent, even age, affects how the person is perceived and classified within the workforce. Although according to Lernia, a person’s non-standard articulation and pronunciation do not necessarily speak to their level of competence. Studies had also shown that the tolerance of deviations from the current Standard Swedish is very low and historically when standardization of Swedish became necessary with public education, the dialect spoken in and around the capital city of Stockholm was adopted as the Standard Swedish.

Stockholm continues to represent the voice of most Swedes, and although it is filling the streets with numerous dialects and accents, it’s unlikely this new chimeric language will be adopted as a uniform dialect in the entire country, but in my opinion, it is fun to listen to! In the United States, it could be fun to try mixing the dialects spoken by New Yorkers, Texans, Minnesotans, those living in the deep South and the West Coast, and others with accents from all the large immigrant groups for a new language of our own! Personally, I think I will stick with my dialect and my accents, but will always enjoy the differences between people.

Click here to check out a couple of samples of the new chimeric language!